We’re always excited to get out and share our favorite beer with more people. A couple of years ago started distributing kegs of craft beer in Fort Lauderdale. Since then we’ve been distributing beer throughout Broward, Miami-Dade, Palm Beach, and Monroe Counties. You can now get Gulf Stream craft beer all the way down to Key West!

As people began discovering pints of our locally brewed craft beer in their favorite restaurants and bars. Messages started rolling in asking where they could grab 6-packs for home. They could always get Crowlers of beer to go from the taproom. That’s very easy to do if you live in Fort Lauderdale. If you don’t live in Fort Lauderdale, it’s not always so easy.

We REALLY hate to leave people hanging. So we started finding ways to can small batches of our brew by partnering with mobile canning companies. Packs flew off the shelves and we couldn’t keep up, so we decided that it was time to get our own canning line at the brewery!

We’ll still have even more delicious, award-winning styles of craft beer on draft at the brewery. Even though you’ll find packs of Gulf Stream when you’re out and about, make sure to stop by and see what’s new on tap in our Fort Lauderdale brewery and taproom! 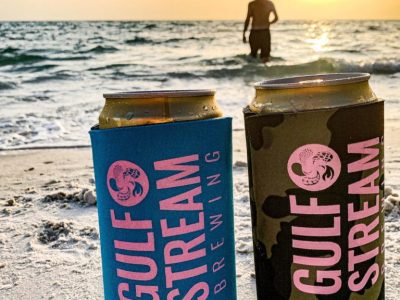 What is a Crowler?